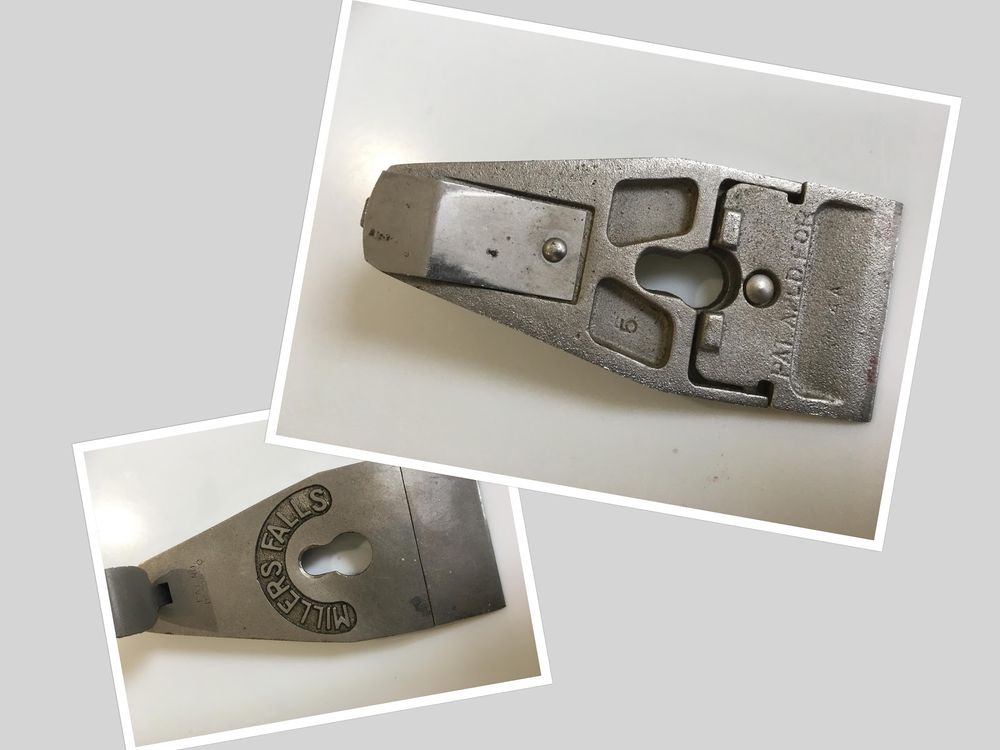 Millers Falls were one of several companies that launched a range of bench planes after Stanley’s  patents on the immensely successful Bailey plane design expired in the late 1920s.  Many makers attempted to improve the design to differentiate themselves from Stanley who were well established in the market and one of these improvements was the two-part lever cap.

Millers Falls announced their new  line of planes in 1929:

Their planes were supplied with a novel lever cap design described in a patent they applied for in 1928.

The lever cap is hinged about 1 inch back from the toe. The front part fits over the “hump” of the cap iron and applies pressure across the width. About 1 1/2” back of the tip are two “legs” which press the cutter against the frog.

Like Record’s stay-set, the intention of the design is to hold the cutter more securely by ensuring it makes contact at three places, rather than just at the toe and heel of the cutter as is usual with the standard design

The “legs” at the pivot point apply pressure close to the start of the hump in the cap iron and this helps ensure the blade is pinned firmly at this point, just as Leonard Bailey originally intended.

Like the stay-set, the resulting improvement is hard to describe: the plane simply feels nicer to use – somehow more solid – when the two part lever cap is installed than when using a standard lever cap.   Of course whether this is something you are willing to spend money on is a matter of personal choice, but I would say it is a far better solution than the recent enthusiasm for very thick cutters which achieve the same thing, but at the cost of more effort sharpening.

In fact it is a rather good idea, and I think Leonard Bailey would have approved!

I suppose we might ask why it was not widely copied.  It is true that other companies would have been free to adopt the design from the 1950s after the patent expired, but as far as I know only one firm did (see below), and indeed Millers Falls dropped the feature in the late 60s.

This is not necessarily evidence of a poor idea though, since by this time the market had changed and creating low cost tools aimed at the DIY market was where the real money was. I suspect the Millers Falls lever cap was just one of the many casualties of the cost cutters at this point in time.

Here is one of their inaugural adverts from September 1929 (below) which contains a handy demonstration of their invention. I have duly tried the test and can confirm it works.

So far as I can ascertain only one company attempted to copy the MF lever cap:  Lee Valley (also known by their brand name, Veritas).  Lee Valley launched a new range of planes branded Paragon in the 1980s that were a close copy of the MF design and included their special lever cap. It was not a happy tale, unfortunately, as the planes were quickly withdrawn following complaints about quality. This thread on the sawmillcreek forum contains a post from Rob Lee himself explaining the problems:

The basic problem we had with the Paragon planes at that time was really the inappropriate body material, and inconsistent stress relief. With cast iron – it can move significantly – overnight, after a week, or after a year. We checked and re-machined each one manually (pre-CNC days!!) …

While it was at/near the top of the heap in it’s day – tolerances and materials are far better now, from several suppliers…. and customers have far more measuring toolshttps://sawmillcreek.org

It seems there was a good reason for the old practice of leaving castings out in all weathers to “season” after all.  Worth noting also that expectations on exactly how flat customers expect their high end planes to be has probably changed over the years, and Rob Lee’s related point that more people now have access to the measuring tools to check this.

The good news is that this episode encouraged Lee Valley to take over plane manufacturing themselves, a  legacy that has resulted in the exceptionally good products they make today.

A comparison between the MF and Paragons here and some more info here. The second article includes a copy of the 1984 catalogue entry:

I got in touch with Rob Lee and he was kind enough to reply to my enquiries. The disappointing news is they do not have any plans to reintroduce the 2-piece lever cap, one of the problems being that there is no standard for the set-back distance for the screw that retains the lever cap, so there would be no guarantee it would be compatible with most bench planes on the market.

He also pointed out that, since MF planes do not command high prices, it would probably be just as affordable for those interested in the design to simply buy used MF planes for their caps, compared to the cost of a newly produced cap. Sage advice indeed, so make sure you get hold of yours soon before they are all gone!