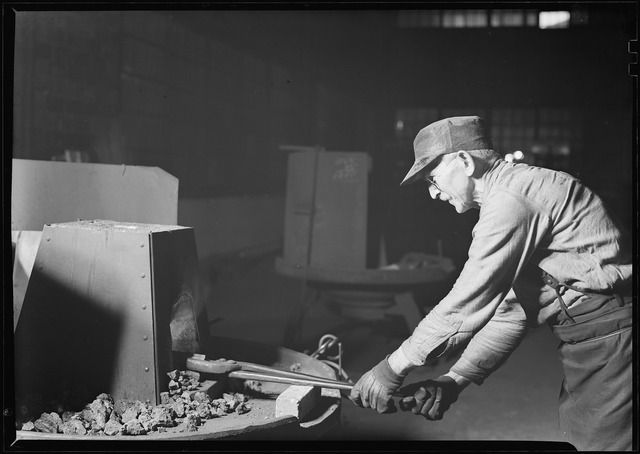 Makers of edge tools, including plane blades, need to be concerned about several different properties of steel.

Toughness: This is the ability of the steel to deform without breaking, cracking or chipping.   Materials that lack toughness are said to be brittle.  Note that sharpening angles have an effect here – the narrower the angle the less metal there is behind the edge, and the less tough it is.  Thus it is possible to reduce the problems from brittle blades by increasing the sharpening angle

Hardness: Hardness is the ability to resist penetration and deformation.   Materials that are too soft will be liable to fold or deform Hardness is normally tested by dropping a hardened steel ball or similar onto  the surface of the test piece and measuring the amount the metal deforms (see the Rockwell scale for instance).   A low tech approach for plane blades and chisels is to try and file them – the file will not bite into hard steel.

There is a generally a relationship between toughness and hardness (e.g hard materials like glass tend to also be brittle).

Surprisingly, hardness – which can be thought of as the ability to resist scratches – is not the only factor that determines wear resistance, and the expected wear-life of tool steels with similar hardnesses can vary significantly according to their chemical composition.

Steel is often mixed with small amounts of other chemicals to form an alloy and these alloys change the properties of the steel.  Some alloys – for example those formed with chromium, vanadium and tungsten – improve wear resistance because the added elements react with the carbon in the steel creating carbide compounds.  These carbide particles are much harder than the material around them and help to prevent the softer steel being worn away.

Certain alloys also change the way the steel responds to heat treatment, for instance by reducing the propensity for the metal to warp when it  is quenched, and can thus help reduce the number of rejects the manufacturer experiences.

The other important factor impacting the final properties of an edge tool is heat treatment.  The difference between steel and iron is the inclusion of a small amount of carbon, and the carbon causes the iron to undergo a change structure at high temperatures that makes the metal harder.

The heat treatment process used to harden steels starts with heating them to a very high temperature and then quenching to near room temperature.   At this stage the metal will be hard but also brittle – it is heated again to a lower temperature and quenched once more to complete the process.  This is called tempering and reduces the brittleness of the metal at the expense of hardness, which also decreases.  Tempering partially reverses the chemical changes that occurred in the initial heating.   In a related process called annealing, the tool is heated to an intermediate heat and allowed to cool very slowly – this leaves the metal in a soft state so it can be filed easily.

Tools that have been incorrectly heat treated won’t hold an edge, either because it folds over (not hard enough) or it chips (too hard).  Note also that tools can be inadvertently tempered when grinding as the sharp edge is narrow and can heat up very quickly.

Thus we see that manufacturers attempting to prolong tool life have many factors to consider in addition to costs and failure rates, trying as they are to balance the time taken to sharpen the edge with the tendency for an edge to dull due to wear, chip or fold over in use.  Since the factors are interlinked, there is no perfect solution.

Modern manufactures like Lee Valley and Lie Nielsen have adopted new alloys for their edge tools, notably A2 and PMV-111)

Sheffield-made tools from the mid 20th century and earlier were created to various recipes and are generally categorised under the broad banner of ‘high carbon steel’, the best of which was Crucible Steel.  These tools can be generally assumed to be a good compromise between edge retention and ease of sharpening, given that they were typically bought by tradesman who needed them to earn a living and who expected to be able to sharpen up quickly on an oilstone.

Of course today tool steel is produced in computer controlled foundries where all the processes can be managed with a high degree of precision and consistency,  but in the 19th and early 20th century a good deal of experience and judgement was needed to successfully create the raw material and then further skill was needed by the blacksmith, not only in the creation of the tool itself, but in the heat treatment process.  The old processes had many variables, including the method of heating, composition of the steel, the presence of impurities, cooling and heating rates, the size of piece being worked on etc etc and each step required experience to get right.

Given all the variables involved in creating a good steel edge tool, you’d think the quality produced by Sheffield makers of old, working as they were without the advantage of modern production technology, would have been highly variable.  However, the large numbers of very high quality steel tools that have survived from the mid 20th C and earlier suggests the makers of the time were getting it right more often than not, despite the constraints they were working with.  Admittedly we most likely don’t see many of the really poor items, which would have been discarded or returned, but the larger makers must have been doing something right to stay in business so long and to have sold such huge quantities of tools.

This of course does not mean that only excellent tools were produced in the past and, if you would rather have the reassurances you get with a brand new product, modern equivalents of both plain high carbon steel and special alloy blades are available.

Steel alloys improve edge retention by introducing other chemicals like vanadium and chromium that react with some of the carbon in the metal to create very hard compounds called carbides.

These carbides can be thought to have a similar effect to the cobbles in a cobbled street which,  because they are much harder than the substrate they are held in, reduce the rate the road wears but eventually will wear down, shatter or become dislodged, creating an uneven surface.

However modern alloy steel blades are not cheap and do not necessarily represent the best choice for everyone: although improved wear resistance increases the length of time the blade remains useable, this benefit must be traded off against the increased time you spend sharpening when it is eventually needed (It is worth noting here that this equation is dramatically altered by the use of laminated blades).

PM-VII is made using a new technique (powdered metallurgy) that mixes atomised ingredients in exact quantities.   The process gives the steelmakers more control the over the size and distribution of the carbides and Lee Valley claim this significantly improves edge quality and retention compared to other alloys without the concomitant reduction in ease of sharpening.

Advances like PM-VII  represent genuine technological progress and many people will take simple pleasure from the knowledge that they are using some of the very best quality blades that have ever been produced.

Looked at from this perspective steel choice can be seen as a picking how you prefer to spend your time: plain high carbon steel can be sharpened quickly and easily with a traditional oilstone but needs to be sharpened relatively often; modern alloys need sharpening less often but benefit from different sharpening routines, e.g use of powered grinders and synthetic honing stones.  %he technical reason for this is that the abrasives – like quartz and silica – that are found in natural oil stones are not as hard as the carbides found in steels such as A2 and PM-V11.  Natural stones can still be used on these alloys but they need to be coarse enough for the abrasives to reach – and thus wear away – the softer metal that surrounds the carbides until they are dislodged.   Synthetic stones contain compounds that are hard enough to erode the carbides and therefore tend to cut faster.