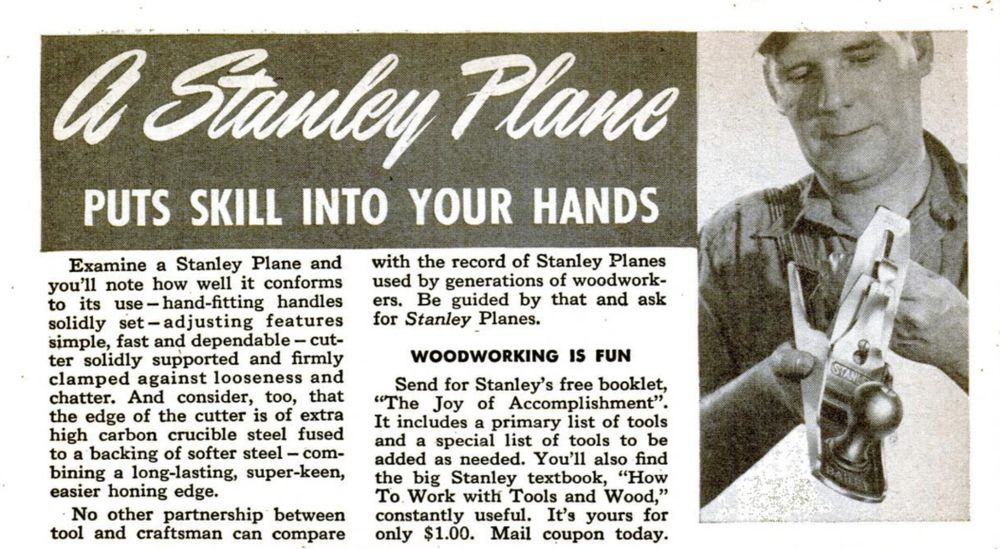 Following the previous articles about iron, steel and plane cutters it may be tempting to view laminated cutters as an historical curiosity from a forgotten era of wooden planes, wrought iron and crucible steel.   However companies like Record and Stanley chose to use laminated irons in their metal planes right up until the 1950s.

What motivated them to keep on with this old technology?  Cost would have been a factor, of course,  as it was for the older manufacturers of traditional tapered irons and no doubt would have been a significant consideration for Stanley and Record as long as they continued to use expensive crucible steel to form the cutting part of their plane irons.   The methods used to create this type of steel were much less efficient than the mass production processes that made the mild steel used for the remainder of the cutter, so we can assume the difference in price between the two metals remained significant in the 20th century, just as it was in the 19th.

Having said that, the material cost savings have to be balanced against the additional manufacturing costs needed to weld and form the two parts into a single piece and the fact that Stanley and Record did – eventually – abandon the practice of laminating their cutters.  Did technology improvements make these extra efforts unjustifiable?

How they were made

A clue can be found in this 1937 flyer produced by Stanley (below) which says:

Both parts, (A and B) are welded together when cast in the ingot and positively cannot be separated

This refers to a process called ‘casting on’ where the harder metal part is placed in a mould and the backing softer metal cast on to it.  We also learn from the flyer that the blades were made by a Sheffield steel maker who would presumably would also have arranged for the laminated material to be rolled and cut or stamped out before being sent to Stanley for heat treatment and grinding.

Record also produced laminated irons and refer indirectly to the same in their promotional book, Planecraft, which was first published in 1934:

Record introduced their bench planes in the early 1930s and, since they were near identical copies of Stanley’s version, it is probable that Record simply copied Stanley’s decision to use laminated cutters and saw no need to advertise the fact.

Why go to the trouble?

Stanley’s slightly apologetic flyer does highlight at least one genuine benefit to the user of a laminated cutter, namely that they will be quicker to sharpen since there is less of the harder metal to remove.

Of course this  benefit would have been more apparent for users of old tapered irons which were considerably thicker and thus required more metal to be removed at each sharpening.  Indeed it could be argued that the benefit when translated to a much thinner cutter is so slight as to be of little relevance to most users (particularly those people using a mechanical grinder), but it is a benefit nonetheless.

Similarly, although harder to prove, the theoretical advantage that the flexible mild steel backing afforded when hardening the steel bit might have allowed Stanley and Record to produce cutters that held an edge longer than would otherwise be possible.  They would still have to content with the usual trade-offs, of course: hardening the cutting bit increases wear resistance but reduces strength (that is, makes it more brittle) and this can contribute to the edge chipping when in use.

Given the marginal benefits to the end user, my theory – and it is little more than a hunch – is that there were  elements of tradition and marketing behind Stanley’s decision to continue to use expensive crucible steel.

Stanley were still advertising their laminated cutters int he 1940s:

As we saw earlier, the handful of operational crucible furnaces that remained open during the 1950s all closed before the end of the decade, and it is likely that Stanley simply lost access to a supply of laminated crucible steel cutters at this point and had to switch to an alternative.

Were Stanley putting a brave face on it when they dismissed the laminated cutters as ‘old fashioned’?  Probably not: the technology to make modern steel alloys was progressing at a pace and it was inevitable that at some point the modern techniques would surpass the abilities of the crucible steel makers who relied so heavily on skill, experience and good judgement to sustain the quality of their product.

We can’t date the Record switch to solid steel cutters precisely either, although a bit of research done by participants on the ukworkshop forum concluded that every ‘square shouldered’ record cutter in our collections was laminated1)

David Lynch’s research concluded that this profile of cutter was in production until the mid 1950s so we can hypothesise that Record switched around the same time as Stanley.   And so ended the mainstream production of laminated plane irons2).