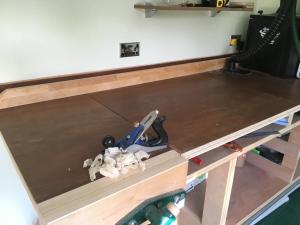 The plan was to acquire hand tools as I needed them and since I had to remove about 5 mm from the top of my bench vice  jaws which, per the instructions from the vice manufacturer, I had left slightly proud of  the top so they could be planed flush after installation, the starting point was a hand plane.

As it happens I already own a hand plane that I purchased about 10 years ago for reasons now long forgotten.  It is one of these:

I don’t remember how much it cost, but you can get one for £35 from screwfix today.  This is not a huge amount considering it is a fairly substantial tool and my expectations for it doing a good job were low.

I was not to be disappointed and my initial attempts at flattening a scrap piece of maple were a failure, consisting largely of juddering, skipping and gouging.    Admittedly it was too soon to know if the result was down to poor technique or to the quality of the tool, but in any case I decided to do some research into what kind of impact having a better quality plane might make.

It did not take long to discover that the consensus among the wood working glitterati is that most modern planes – bar two or three modern makers, but including those made by both Irwin Record and Stanley – are terrible quality, and that the halcyon days of plane making had ended sometime in the late 1950s, peaking either between the wars or in the late 1900s, depending on who you ask.

At this stage I have to confess to a failure in my normal tendency for painstaking (some would say anally retentive) research into prospective purchases, and I quickly accepted a view that I saw repeated many times by various – largely American – woodworking pundits on t’internet.   The thinking goes:

the first bit of advice is not contentious and is familiar from many walks of life, the second – well how are we non-experts to know any different? – and the third, although highly specific, was repeated so often that I concluded it must be fact.

All the makers above  produce a plane similar to the one I already own (a so called number 4 smoothing plane) but they cost between £200 -£350 from the non-Chinese makers, and even our Chinese friends can’t produce one for less than £130.  erk!  Luckily the (much smaller) block planes are cheaper – and the LV block plane was on sale from Axminster for a mere £85  (erk again).  So I bought one.

I was most pleased when it arrived: it was obviously very well engineered, worked immediately without any fiddling and it was a pleasure to use.  However, it was clear even to a non-woodworker like me that – although it would work – it really was not intended to flatten a relatively large surface.

So I took up my research again, this time with a little more care, and eventually uncovered another view, vocally championed by Paul Sellers : you can – without much difficulty – get an old 04 smoothing plane for less than 30 quid and tune it to perform as well as an expensive new one.

On further investigation it seemed that you can get pretty much any plane to work – even a horrible cheapo one like the Irwin Record I already owned – so long as you are prepared to spend a bit of time to set it up.  Thus emboldened I decided to give it a go (details on what to do will be in a subsequent post) – it took several hours of fiddling , flattening and sharpening with many futile tests that showed little progress and occasional reverses, but eventually everything fell into place and to my astonishment it started to work.

Very satisfying!    My journey into the world of hand planes had begun!