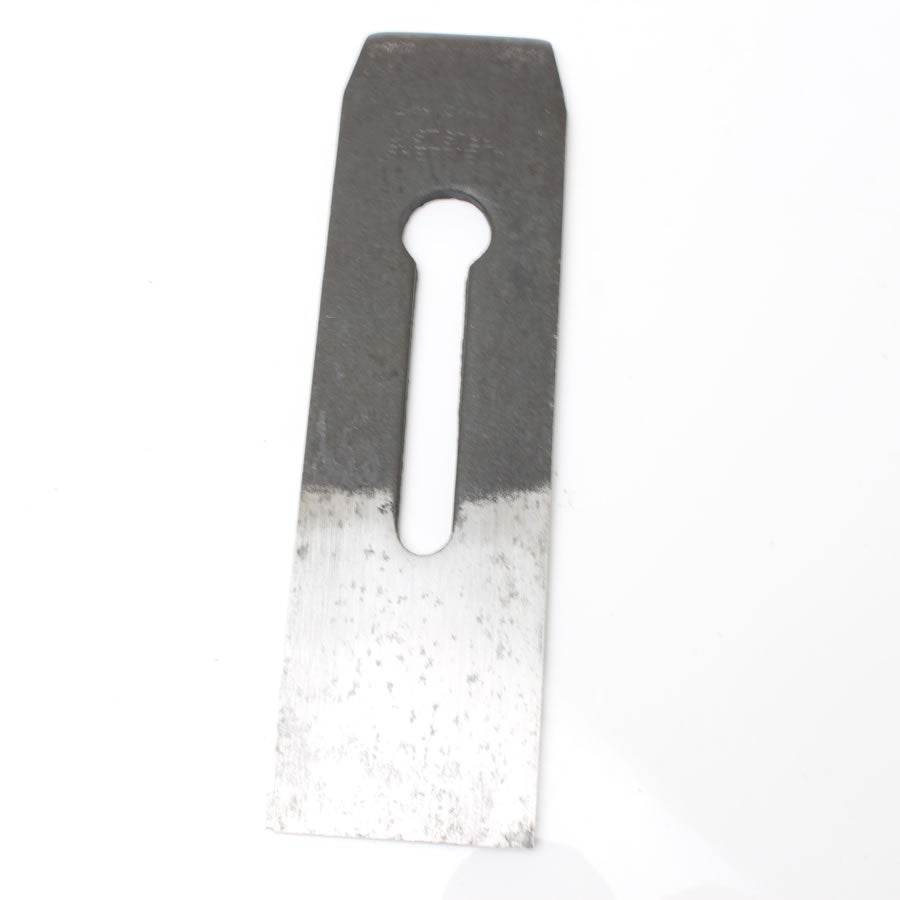 If you pick up a wooden bench plane from the the last century (there are lots of them about still!) the chances are it will have a ‘laminated’ cutting iron (we are going to touch on some basic metallurgy with many mentions of iron in this post, so I will refer to them as ‘blades’ hereon).

These blades were created by forge welding a small piece of high quality steel onto a back made of either wrought iron or mild steel.  In Sheffield this process was know as steeling and the resulting tools were said to be lined.

The welded steel bit is often very obvious on older irons where the back was made of wrought iron, since there is generally a distinct line where the two metal parts join on the face of the blade.  Here is one of mine:

Modern cutting blades are typically made of a single piece of steel, although Stanley and Record produced laminated blades up until the middle of the 20th century (more of this later).

You can see Peter Ross forge welding the two pieces of a chisel in this video.

As you can see, creating a laminated edge tool requires the blacksmith to perform additional heats and more steps than would be required if making it from a single piece of metal.  The extra steps also introduces additional risk, since the high temperature needed to successfully fuse the two parts together is close to the point where cast steel may burn or crumble, potentially ruining the tool.   Steel is said to ‘burn’ when it is overheated and starts to oxidize.  One of the consequences of this is that carbon can be removed from the steel, causing it to behave differently than expected when heat treated.  When steel crumbles at a high temperature – which it is particularly prone to do if it contains impurities like sulphur – it is said to be ‘red short’ or ‘hot short’.  Short in this context means ‘easily broken’ – a cold short metal, for instance cast iron – is brittle when cold.

There must have been a good reason for the additional effort and the obvious explanation is that cast-steel was significantly more expensive that wrought iron and that the savings from using smaller amounts of the expensive material offset any extra effort and fuel consumed in when laminating the blade.

An alternative theory is that lamination was done primarily for the benefit of the tradesmen – in other words they preferred laminated blades and the manufacturers were simply meeting the demand.

It is certainly true that making plane iron this way has at least one benefit, in as far as it helps reduce sharpening efforts.  This is because wrought iron and mild steel are much easier to remove with abrasives than cast steel, a fact that is particularly relevant with the thick laminated blades used in the 19th C.

Some also argue that the laminated structure allows the cast steel part to be hardened more than would be advisable with a single piece of steel because the lamination stabilises the cast steel bit and reduces the likelihood of it cracking when it is heat treated.

To find out where the truth lies we can start by looking at why cast steel was expensive, and this means we need to first understand a little about the how it was made.