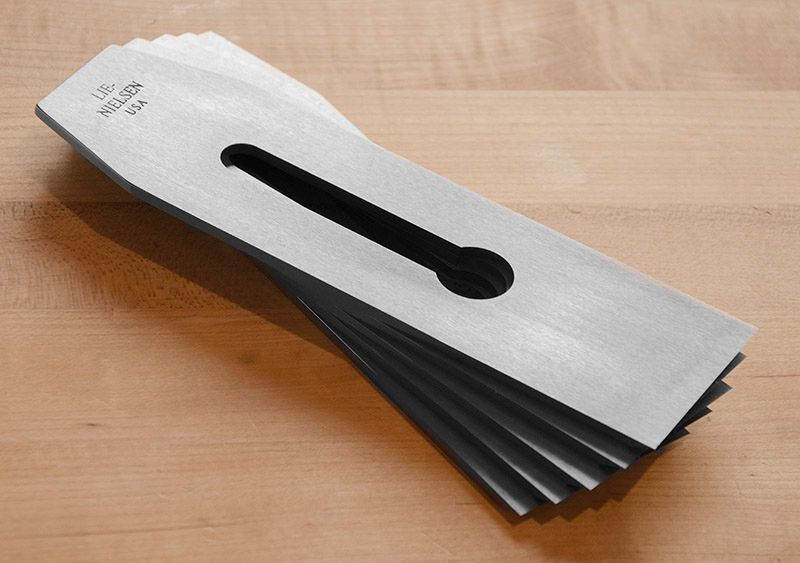 From the time  Leonard Bailey introduced metal plane in the 1860s until quite recently they were supplied with thin irons.   On paper this is a good thing: thin irons are an improvement on thick ones in as far as they are cheaper to make – since they use less material – and are easier to sharpen because there is less metal to remove1.

But modern high-end manufactures of bench planes, for instance Clifton, Veritas and Lie Neilsen, have all adopted thicker irons (typically over 50% thicker – with the original irons being 1.5-2 mm and the modern ones 3-3.5 mm).  Why is that?

From his patent, we know that when Leonard Bailey started to experiment with very thin irons he found they were more susceptible to flex and “chatter” in use 2.

As a result he modified the cap-iron on his planes in an attempt to improve matters.  It seems this improvement did a satisfactory job since the design has been in production for around 150 years without modification and millions have been sold.

However, his patent does highlight a potential weakness of the design, namely the possibly for the thin iron to flex in use.

Paul Sellars explains in this post that chatter is not a common problem, and this is reflected in the fact that it is actually quite difficult to engineer the circumstances to reliably reproduce it.  He also notes that the effect is easily confused with much more common problems that cause the plane to jump or skip across the work, because of poor technique or incorrect plane set-up.  His final point is that, although these other issues have nothing to do with the use of  thin irons, unscrupulous salesmen may play on the possible confusion between these more common issues and the unrelated issue of chatter to justify the more costly thicker irons.

I had a half hearted attempt at reproducing chatter conditions on this bit of beech, but the only way I could get chatter-y marks was by deliberately pressing hard on the tote and lifting pressure off the front handle at the same time. This is not likely to be down to the blade vibrating at all, but just a result of not using the tool correctly (the end result looks a bit like the chatter effect though!)

So, if we accept that chatter is not really a major problem in the real world for users of thin-iron bailey planes, how can we explain the popularity of more expensive thick irons?

The answer seems to lie in the nebulous concept of how the plane feels in use.  I confess I can only speculate here, since I do not have a high-end plane to experiment with, but it is clear from many enthusiastic reviews of these planes that a big part of their attraction is their ‘solid’ feel compared to cheaper versions.   Now of course some of this must be down to improvements in precision engineering methods or due to the use of heavier castings, compared with the original bailey models from Stanley and Record et all, but I think the thick irons must be a contributory factor.   Lie Neilsen have this to say:

“The blade is the most important part of a hand plane. Our blades are thicker, sometimes much thicker, than other manufacturers’ for a solid cut”

Unfortunately, I have no plans to buy a new posh bench plane to confirm my suspicions.  Instead I have splashed out on a couple of (much cheaper!) modifications that also claim to reduce the tendency of thin irons to flex – and thus, theoretically, to improve the feel of the plane, and reduce the (small) likelihood of chatter.  Step forward the Record Stay-set cap iron and the Miller Falls two part lever cap3.