Steel is made by combining iron with small amounts of carbon.   The process to convert wrought iron to steel involves adding back carbon - the majority of which was removed by the puddling process - to the metal in  a controlled fashion until the desired proportion is achieved.  The process used to do this was called cementation and the steel produced was therefore also known as cementation steel.

The process of forming steel by cementation is performed in two parallel troughs constructed of fire brick, or of an open-grained siliceous free stone, unalterable by the fire. These troughs are placed upon a long grate beneath an arched vault, surrounded with a cone of masonry. Bars of the best Dannemora or oregrund (Swedish) iron, free of cracks and flaws, are then selected for the purpose of cementation. A layer of coarsely bruised charcoal, capable of passing through a quarter inch riddle, is now laid at the bottom of the cementing troughs, and above this is placed a row of bars of iron, another stratum of charcoal succeeds, and then bars of iron, and so on till the trough is nearly full, containing about eight tons of iron. The whole is then covered with clay and sand mixed, and rammed as close as possible to exclude the air. The heat of the whole is raised to a glowing red, which is kept up from seven to eleven days according to the quantity of iron. Through a small hole in each trough a bar is allowed to project, that it may be taken out from time to time to observe the progress of the operation. When the trial bars announce the perfection of the process, the fire is extinguished. The bars retain their original shape, but their surface is covered with blisters, as if a gaseous fluid had been confined in different parts of it. Hence it is called Blistered Steel. The bar iron when thus converted into steel, is found to have increased in weight from four to twelve oz. per cwt. or on an average 1 part in 224. The first proportion constitutes mild, and the second very hard steel; and if the process had been pushed much farther, the steel would have melted, and in the act of fusion would have taken an additional dose of charcoal, so as to bring it to the state of Cast Iron, No. 1.

Blistered steel thus made is used only for the coarsest purposes. Its texture is greatly improved by being formed into smaller bars under the tilt hammer, in which state it is known by the name of tilted steel.

In order to improve the steel still farther, the bars are broken into short pieces, and these being put up in small parcels, are welded together in a furnace, and drawn down into bars, which, by repeated welding and tilting, acquire a compactness and toughness, which fit it particularly for swords and other large articles of cutlery. This steel is called shear steel, or German steel, from its having been prepared in great perfection in Germany.

As mentioned in the above description, Sheffield makers preferred to use high-quality Swedish bar iron as the raw material for any blister steel that was destined for use in tool making (the production of bar-iron is described here)

For centuries the mines in Dannemora, Sweden, enjoyed the highest reputation for producing the finest iron ore.  The very best bar iron was stamped with the ‘hoop L’ trademark indicating it came from the Leufsta forge[1].

We can learn a little about the history and repute of Leufsta branded iron from a court case heard in 1884: Heaton’s Trademark [2]

In February 1882 George Heaton (director at Brades Co. and WHS) attempted to register the following trademark:

The application was opposed by the Baron Louis de Geer, the owner of the Leufsta mine in Dannemora, on the grounds that the hoop L mark was the exclusive property of his firm.

Heaton argued that it was common practice for firms to make their blister steel from cheaper grades of Swedish iron and to then obliterate the original trademark stamp on their cemented-steel bars (the original stamps having survived the cementation process) and replace it with the hoop L stamp so that they could charge more for it.   He explained that his firm had been doing it for the past 50 years and that he knew of at least 30 other firms that did exactly the same thing!

Needless to say, the judge threw the trademark application out of court and ordered Heaton to pay costs, summing up with the pithy:

(the claim was) a falsehood which certainly gains nothing in respectability from being continually repeated.

During the court case we learn that the Leufsta hoop L stamp was first registered in Sweden in 1718 and was most likely in use for part of the prior century too.  We also learn that the owners granted sole import rights of Leufsta iron to William Jessop and Sons in the 1860s and subsequently to Thomas Firth & Sons from 1880 (prior to 1866 there had been various other importers, including Sykes of Hull).

Here are some contemporary adverts from importers of Leufsta iron:

Each furnace consisted of two troughs (‘pots’) built of fire brick approximately 12′ by 3′ by 3′.   The fire grate was located between the two troughs with a flue rising in between them, together this was covered by an arched vault so that heat passed evenly around them.  The whole structure was surrounded by a distinctively shaped large chimney stack, often over 50′ high.

The troughs were filled with alternating layers of broken-up charcoal and bar iron and then covered with sand, loam or wheelswarf  collected from the troughs of water cooled grindstones (the swarf was a mixture of water, stone and steel particles from the grinding of edge tools), which caked together as the heat of the furnace increased, sealing the top of the troughs so that air could not enter.

Once the fire was lit the furnace needed about 3 days to get to the temperature where the carbon from the charcoal begins to diffuse into the iron, and from this point it would be kept at temperature for a further 7 to 10 days to allow the process to complete 3).

During this process the carbon would react with impurities in the iron to produce gaseous bubbles that would form the characteristic blisters on the surface of the bar, and this led to the metal being known as ‘blister steel’ (it was also known as ‘cementation steel’  and, occasionally referred to as ‘converted’ steel, after the process which was known loosely as ‘conversion’)

Once the furnace cooled – a process that could take a further two weeks – the steelmakers would climb into the furnace to break through the layer of material used to seal the troughs (known in Sheffield as crozzle) in order to unpack the bars of converted steel (blister steel was also known generically as ‘bar steel’).

The steel bars were broken at the tip (‘topping’) and the fracture examined so that each bar could be graded according to its ‘temper’ (its degree of carburisation).   The bars nearest the fire are more highly carburized than those at the center –  in the classification below for the lower numbers the conversion has not passed far into the bar, while the highest number has converted entirely

Even the highest temper steel bars did not have a uniform distribution of carbon since the carbon was absorbed in greater quantities into the outside of the bars than in the centre.  This limited the steels usefulness since when the metal was hardened the effect of the heat treatment would differ according to where in the bar the material had been taken.

A further refined form of blister steel, known as shear steel – so called because the inventor (Crowley) was in the habit of stamping his product of a pair of shears to indicate its suitable application[5] - was formed by breaking the thin bars of blister steel to lengths of about 2-4 ft long, and then heating  6 or so strips held together in a bundle.

The red-hot bundle was then placed under a heavy forge hammer which welded the rods together.  The thick bar could then be hammered or rolled to the size required (the resulting bar could be doubled up and welded again creating double shear)[6].

This subsequent process went some way to making the steel more homogenous  but the material still had areas of high and low carbon and this could result in inconsistent hardening.  Nonetheless the steel was found to have good qualities for use in the making of razors, knives, swords , shears and scythes.

By the turn of the 19th Century the term German Steel seems to be used generically by tool makers (particularly in saw making) to denote any steel deemed to be 2nd quality compared to Sheffield crucible steel, however, the term also describe a steel making technique that was common practice in German steel making regions like Westphalia.

This steel was sometimes referred to as raw or natural steel because it was produced directly from pig iron[7].

A thin layer of pig iron is melted in a furnace and allowed to stay in the flames until it has partially decarbonized and starts to solidify at which point charcoal is drawn over the top and further pig iron added until it melts, solidifies and combines with the previous layer. This process is repeated until a large enough bloom is created to be withdrawn from the fire and separated into parts.

The amount of carbon retained in the resulting metal was critical to its final quality – too much and it would be brittle, too little and it can’t be hardened – and getting this right depended entirely on the skill of the steelmaker.  Even when the carbon content was judged correctly the unrefined steel was nonetheless of limited use for tool making since it was not homogenous, containing some areas with high carbon content, and others with little or none (meaning some parts of a single bar might harden and others not).

This, plus the irregularities in quality from the various makers, meant the steel did not command high prices.

As with blister steel, the metal was improved by forging and welding bars together to make it more homogenous, upon which it was broken and graded according to its ‘temper’ (carbon content).

Refined German steel was was often used in Germany for the making of cutting tools and also put to use in 2nd quality tools in Sheffield, but it was not used for more important purposes and this reflected in the price (in 1855 refined German Steel was about half the price of the best blister steel – Sanderson, 1855).

A second technique for producing steel from pig iron was also introduced in Westphalia during the 1st half of the 19th century which involved the use of a puddling furnace.  The first step was to puddle (decarbonize) a charge of pig-iron and then a second smaller charge of of pig-iron (about 15% of the weight of the original charge)  was allowed to melt gradually until it mixed with the metal previously added.  The newly introduced carbon rich material caused the original bloom to first boil and then resolidify.

This process retained some of the carbon from the second charge but the resulting steel was rather imperfect and this was reflected in the price – Puddled steel selling even cheaper than unrefined German steel. 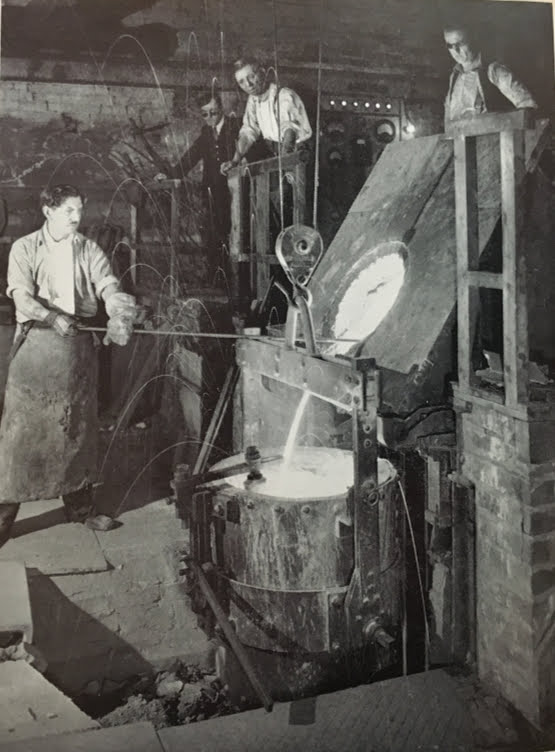 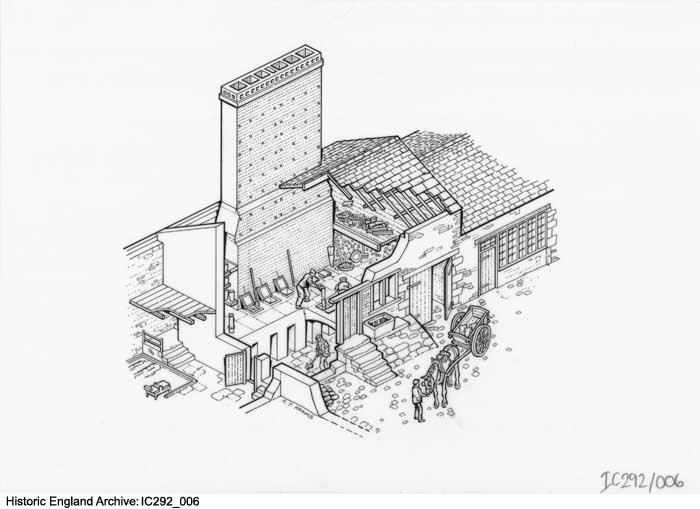 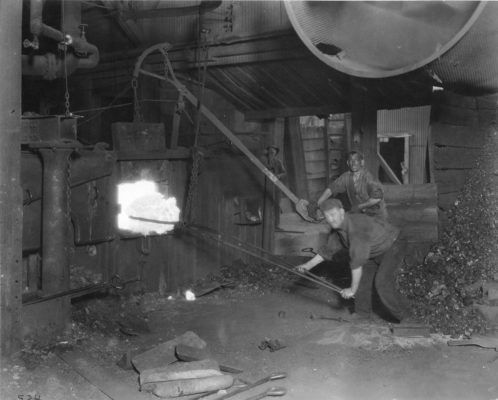