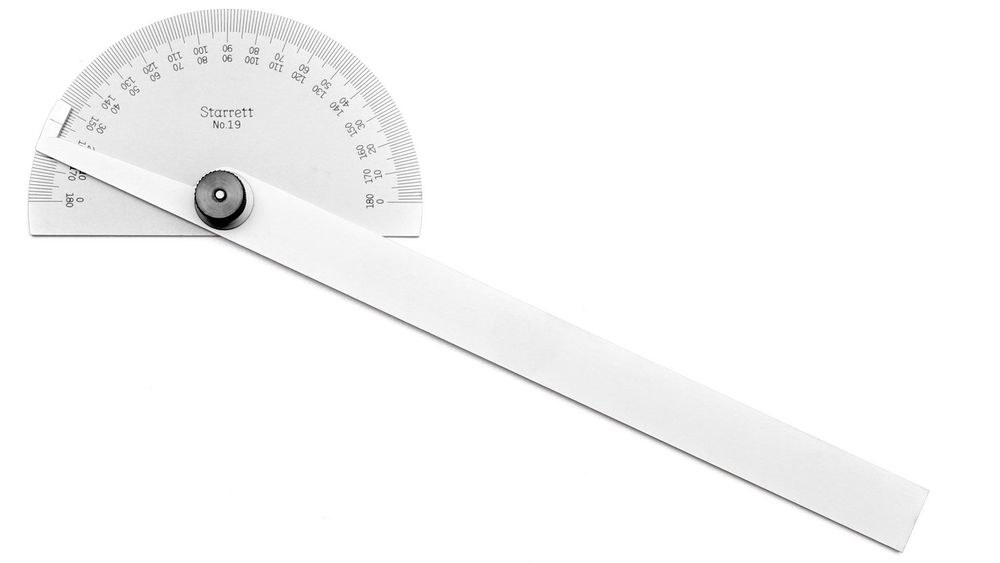 Once you have established the rough shape of the bevel the next step, referred to as honing or whetting, involves rubbing the iron against progressively finer abrasives until you are satisfied with the sharpness of the edge.

There are a couple of basic principles involved in how bench planes cut:

On that basis you might imagine all plane blades would have a big fat bevel and be presented at a very low angle – thus making it easy to push and less likely to chip –  but as usual things are a little more complicated than that.

Assuming you have a Bailey style plane then the blade will be fitted “bevel down” (with the bevel towards the wood) as shown in the picture above .  The blade is made of a thin piece of steel which is the same thickness along its length, and this means that the angle the blade is presented to the wood is determined by the angle of the bed it is on (called the "frog").   The frog in a standard bailey style plane is is manufactured with a bed set at 45°.

The only way to increase the angle of attack for a bailey style plane is to swap the frog for one with a steeper angle or to create a “back bevel” on the blade. Creating a bevel on the flat face of the blade has the same effect as raising the bed angle because in both cases the angle the blade is presented to the wood is increased – this angle is sometimes called the effective presentation angle.  As shown in the illustration above, creating the steep back bevel shown would increase the effective presentation angle significantly – c.f the dotted pencil line.  Why does this matter?

Once the plane blade starts to cut into the surface of the wood the shaving rides up the blade.  As the pitch increases the shaving is forced to bend more sharply so the fibres in the shaving are more likely to break early and, thus weakened, are less likely to lever out the other fibres they are attached to.  In other words, raising the pitch of the blade can help reduce the problem of tear-out.

The effect of the pitch of the blade on tear-out is well known and historically particular names were given to the common angles used in bench planes to control this problem:

The downside to using higher angles is that the steeper the pitch the harder it is to push the plane.   45 degrees (“common pitch”) is a good compromise between  effort and tear-out prevention, and this is the reason Leonard Bailey used this angle when designing his metal planes.

From the above it should be clear that, for bevel down planes, the angle of the bevel makes no difference to how the plane cuts, since the pitch stays the same no matter what angle you use.

There are a couple of other considerations that are relevant to establishing an appropriate bevel angle for your work:

The relief angle is the angle between the bevel and the workpiece.  Generally it is not very important in bevel down planes, however wood fibres compressed by plane body and blade have a tendency to spring back up after they have been cut and, if the relief angle is insufficient, then the fibres will push against the bevel. This upwards pressure can cause the plane to skid along the surface of the wood instead of taking a consistent cut.

There are many factors impacting the extent of this”spring-back” effect, including the type of wood, the grain orientation and the sharpness of the blade, but the consensus seems to be that, although in ideal circumstances you can get away with very small relief angles (say 5 degrees),  you are better off with a relief angle of at least 10-15 degrees to allow for the less than ideal conditions you will encounter now and then.

As mentioned at the start of this article, there is a trade off to consider though:  increasing the relief angle reduces the strength of the edge since there less metal behind the edge to provide support.

Once again it is necessary to find a compromise – in this case between allowing a sufficient relief angle and blade longevity – and the compromise adopted almost universally for bench planes is to aim for a honing angle of around 30 degrees, creating a relief angle of 15  degrees or thereabouts on a bailey plane.

A note on bevel-up planes

The effective presentation angle of a bevel-up plane is the angle created by the bed + the angle of the bevel combined:

As a result most bevel-up planes have a frog that is at a low angle, typically 12 degrees.  If the blade is honed at around 30 degrees the resulting pitch is therefore 42 degrees – close to the so called common pitch used in Bailey planes.

Fans of bevel-up planes point out that, because the effective pitch is determined by the angle ground of the blades, these planes are particularly versatile: you can have one plane body and keep several blades honed at different angles for different purposes.

For instance, 30 degrees for most jobs where you want a good balance between effort and edge retention; and higher angles that can be used for wood that is difficult to plane without tear-out.  Some of this versatility can be achieved in a standard Bailey plane by putting a bevel on the flat face of the iron however, this technique is generally regarded as a get-out-of-jail-free card to be used when you have no other option, compared to the “proper” practice (which would be to reach for a plane with a higher bed angle, or to use the cap iron to control tear-out).  It should also be clear that the bevel-up plane can do something that is impossible on a Bailey, namely that it can be honed with a low angle to create a pitch less than 45 degrees.  This can be useful in some applications, like planing end-grain.

and so after all this rambling we now understand that the cutters in bevel-down planes are typically honed at about 30 degrees because it is a good compromise between edge retention, durability and the need to maintain a relief angle.  We also learned that it is not important to get the angle exactly right – roughly 30 degrees is just fine.

Finally, we learned that higher pitches are harder to push but less prone to tear-out.   In the next exciting episode we get on with honing.