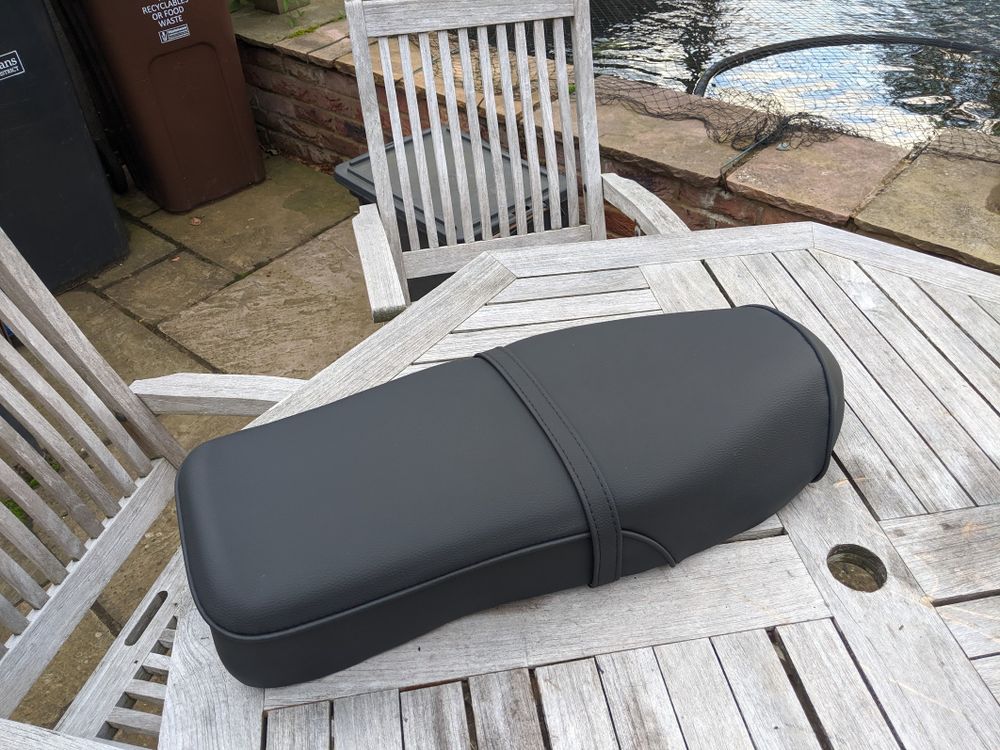 The seat was a bit of a mess:  despite having been repainted several times it was rather rusty on the underside, particularly around where the hand strap is fixed on (all the used c90 seats I’ve seen on ebay are the same – I suppose rain must get blown underneath and trapped between the seat and the fuel tank).

Having removed as much rust as I could with sandpaper and scrapers I used Hydrate 80 (a rust stabiliser) to treat the whole base.   There were a couple of small cracks in the metal developing behind the reinforced section so I epoxy’d on a couple of additional strengthening plates having first roughly hammered them to be the same profile as the base.

The rubber bumpers were split, stiff and brittle.   I read that adding oil of wintergreen to water and soaking rubber parts for a few minutes in the boiling mixture softens them up – it works!  I did the same with the air cleaner (note the parts do swell up initially but then shrink back to normal size later). I super glued the splits

The cover was knackered so I got a replacement from Lynne at Classic Car Seats.  I am very pleased with it (btw although the cover advertised on ebay was copied from a 1974 c90, it is a perfect fit for the z2 seat).

The foam was still in good repair and I was able to salvage the rivets/rings to remake the strap.

There is a row of sharp teeth punched around the bottom rim of the seat that pierce the underside of the cover to hold it tight and, if they have been weakened due to rust, it is almost inevitable that some will snap off as you stretch the cover over.   I lost a couple but it doesn’t seem to effect the fit.  Here is the end result: