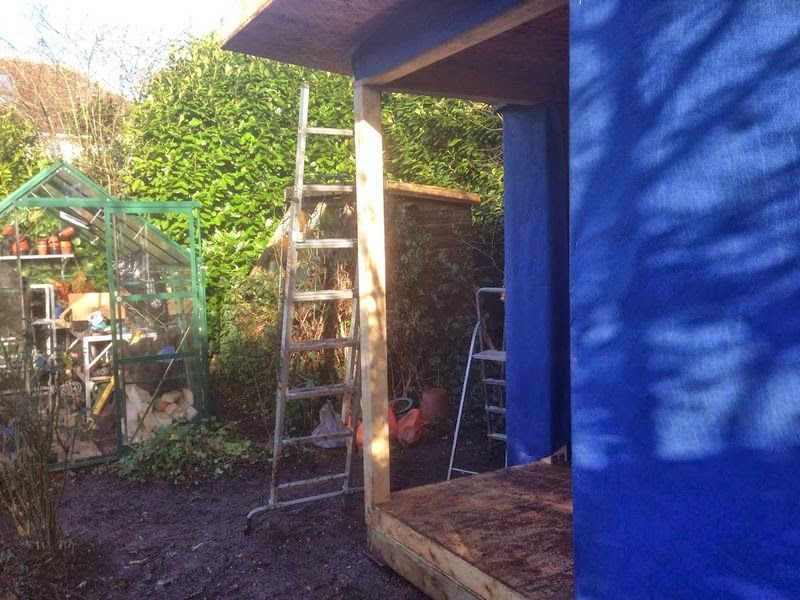 The weather here is going from bad to worse, but earlier today I dashed out in a quiet spell to try and fit the window frame only to get caught in an unbelievable hail storm – some of the hailstones were about 1cm across and they were hammering down – I really needed to stay out long enough to go through the usual faff of getting the tarp over the building , but in the end the hailstones were so big I had to dive for cover under a tree until it stopped. A salutary reminder that getting things reasonably watertight is the number one priority.

Anyhow, back to construction – having finished the roof I wrapped the building in the breathable membrane supplied by the SIP manufacturer. I have not been able to find out much about this stuff: it is a fairly stiff fabric that seems to shed water reasonably well yet allows water vapour through.

Vapour control is an important consideration when designing a wooden building.  Surprisingly not all damp problems are caused by water entering the building from the outside, damage can also occur due to condensation: air contains water vapour, and the amount it holds depends on the temperature (the warmer the air the more vapour it can hold).  When the temperature drops to a point where the air can no longer hold all the vapour it contains the water condenses out.

The air in inhabited rooms tends to be warmer and more humid than the the outside air and, since the water in the air  tends to condense it meets surfaces cooled by the outside air (as we often see when water condenses on the insides of cold single glazed window panes), some care must be taken when designing buildings to avoid this.  This is particularly important in wooden buildings where the effect of condensation – for instance in the voids used to hold insulation – can cause the continual wetting of the wooden structure and lead to serious problems.

A common solution for an insulted shed is to install a vapour barrier on the inside of the building and to choose a vapour permeable medium (for instance a breather membrane) to go outside of the insulation:

In a SIP building, when properly installed, the panels themselves make a very effective solid vapour barrier since the glue in the OSB boards and the PIR foam filling are impermeable to vapour and there are no voids for water to collect in.

The reason for attaching a breather membrane to the outside of the building in this situation is simply because the cladding on a wooden building is unlikely to be completely watertight. The membrane  ensures that any water getting past the cladding can run down the membrane away from the building.   It is breathable so that, should any water get behind it, it will not be trapped and can evaporate away.

A popular membrane in the US, where it is known as  ‘house wrap’, is  Tyvek which is also breathable but appears to be lighter and more papery than the fabric material I used. One good thing about the membrane I was supplied is that it came in one big piece that I could wrap the whole building in one go. I used staples to hold it to the wall.

I had done a fair bit of research into how to flash the window and doors to stop water from collecting on the wooden structure, but most of the info on t’internet relates to windows with external flanges. These are (sensibly) designed to minimise the chances of water entering around the side of the window by providing an external flange you can flash over the top off.

Windows in the UK come without flanges and are designed in a way that they will shed water to the outside so long as they are properly sealed (with silicon) from the inside. No doubt this is down to the fact that most of our houses are brick built…

The lack of timber building that goes on here also limits the options for flashing materials – in the US you appear spoilt for choice with various flexible membranes, pre-formed corner sections and the like. No such luck here, and all I could find (following a rather cursory search) was a bitumen based product with a flexible plastic skin. Despite applying a primer the flashing was not very sticky – we shall see how well it holds up.

The best advice on flashing that I found on the internet was the cosmic: think like a raindrop.

… I duly did this and tried to create some redundancy in those areas where a raindrop might find its way. For instance, I i created little patches to close the gap in the corners left when you cut and fold the flashing and then covered these with further lengths of flashing running across the floor and a few inches up the posts.

I worked from the bottom to the top, overlapping the lower pieces with the higher ones. In my raindrop inspired state of consciousness I imagined myself trickling over each layer until I reached the bottom and fell harmlessly on to the ground. 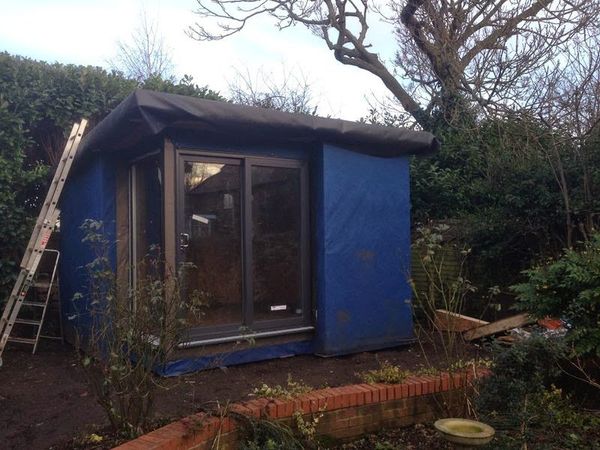