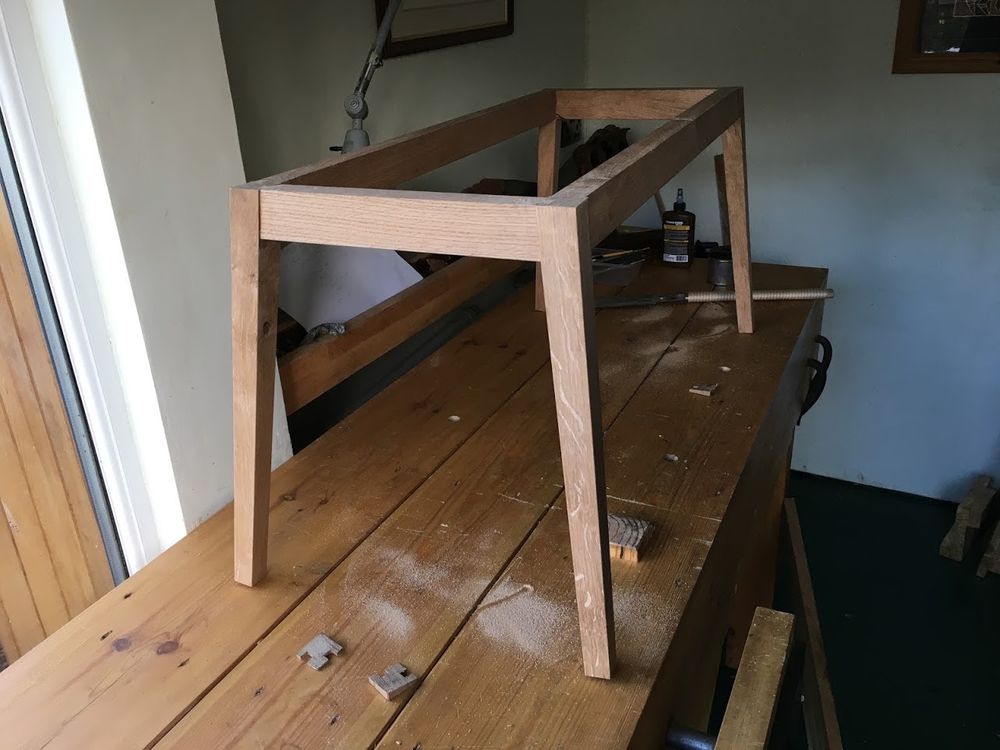 The plan is that the legs will be splayed 6 degrees and tapered on two sides. I will keep the top bit square and start the taper from beneath the aprons.

My reasoning was that if the tapers went straight through to the top I would need to get the tapers exactly the same on each leg to avoid them sticking out at wonky angles, and I was not confident I could do it. The other approach just seems to require you to get the legs square and roughly the same size and then to cut the tenon shoulders at an angle of 6 degrees.

I did a few test mortice and tenon joints (my first ones!), all of which were terrible and then concluded I had just better get on with it. I used a sort of combined “rod”/guide to lay out the mortices (idea pinched from R. Maquire), but they results are still varying degrees of rough, and the inside of the walls all undulate to some degree. At least the guide meant they are all in the right place and, by the 3rd one, I had worked out how to get to the right depth in the first pass of chops with the chisel. So some improvement and the guide did help, but I obviously need to do more practice.

I found the tenons a bit easier, and could get a reasonable fit on the face surface but tended to end up with slight gaps on the other edges.

I have now glued the legs and aprons. I realised belatedly as I was gluing the long sides that my 2 long clamps were not quite long enough. A pity because on the short sides, which I could clamp, one of the small gaps on the inside of the joint closed up nicely, but I am left with a gap on the inside of one of the long sides. Still all the joints look good from the front and overall it turned out better than I expected.

Lesson learned: I should get some more clamps (which is exactly what I concluded the last time this happened. doh!).

Here is the base after I flushed the tops of the legs to the apron but before I cut them to length. Having learned the lesson from one of my slightly wobbly side tables I cut them to the same length carefully and tidied up the saw cut with a block plane to get them spot on.

..and here it is are after several applications of tannin solution and immediately after a splash of rust solution. Ebonizing is most enjoyable and it is very gratifying to see the wood turn deep black as you watch!

Just got to finish the top and screw it on (I drilled oversized holes in the apron) and then apply the finish which hopefully I’ll do next weekend. 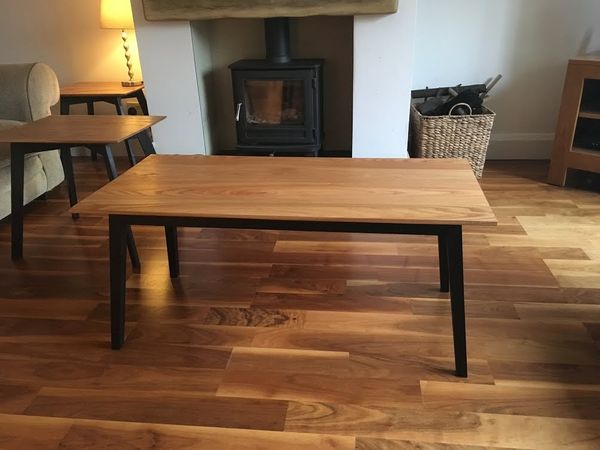