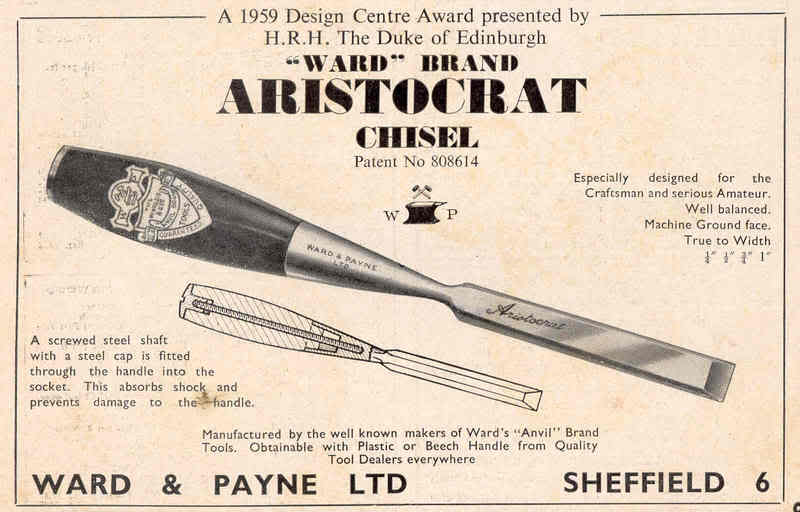 So far as I can discover the Ward & Payne Aristocrat chisel is the only chisel ever to have been granted a Design Award.   The Council of Industrial Design (CoID) granted the award in 1959.

The CoID was set up by the British Government as part of its plan for post-war reconstruction.   In a remarkable piece of foresight the Government of the day recognised the important part design would play in helping British firms compete in the global economy and they aimed to promote:

‘by all practicable means the improvement of design in the products of British industry’.

It was deemed so important to reestablishing our position as a leader in international trade that the creation of CoID was approved by Churchill’s Cabinet in 1944 while the country was still fighting the war.

Despite the noble intentions and prescient insight that led to the creation of the CoID the design awards sometimes received a sniffy reaction.   Rather unfairly, in my opinion, as they did select some absolute crackers:

Was the Aristocrat a good pick too?  Read on!

I was intrigued by these unusual chisels when I first saw them and, when a set came up on ebay, I bought them thinking it would be interesting to compare these premium models to my motley collection of old chisels.

They were pricey – nearly £20 each if you include postage – but based on the nearly intact Ward and Pane Transfers I was hoping they would be little used.

I was pleased to find they had not had much use. In fact the 1’’ and ¾’’ look like they still have the original grinding marks on the bevel. The 1/4” has been honed but appears to be the same length as when new.  Only the 1/2” has seen a lot of use:

The shape is like a typical parallel-sided firmer but rather than having sides at 90 degrees they form a bevel at 75 degrees from the face – an unusual design:

Other than their unusual but elegant look, their main claim to fame is the patented handle design incorporating a threaded rod, one end of which is screwed into a tapped hole in the socket and the other into a cap which, when tightened, secures the handle to the socket:

This invention claims to solve the following problems:

a tool with the usual tang to be driven into a hole in a ferruled handle is always liable to have the blade work loose from the handle in use, and the same difficulty is found with the lesser-known type of tool in which the blade is formed with a tapered socketed shank

According to the WP catalogue from 1964 replacement handles were indeed available and available in both wood and black plastic:

The other interesting thing is that some of the (presumably earlier) marketing material says that the “blade is HAND forged”. This reference to “HAND” is conspicuous by its absence in the 1964 catalogue marketing – perhaps a sign that economies were needed a few years after this model was introduced:

The purpose of the handle design is not to allow you to clout them as hard as possible, rather it is to stop the handles coming lose or falling off – a problem even the excellent makers at Lie Neilsen have been unable to prevent with their socket chisels since wood will shrink or expand according to the amount of moisture in the atmosphere.

The Aristocrats were about 3x the price of the equivalent standard bevel edge firmer mentioned in the same catalogue, although surprisingly they are not the most expensive chisels W&P offered. This dubious honour belongs to “high speed steel tipped joiners chisels” which are another 30% more again.  According to W&P these are a “World first”2)to be fair they did patent the manufacturing technique, although HSS tools were a bit of a rage in the 1960s.

The catalogue was recently posted to archive.org and here is the page describing their high speed steel chisels:

Compared to standard chisels, Aristocrat chisels are rather uncommon, no doubt a reflection of their very high price and relatively short production run.

Other than looking cool, were they a good solution?   Of course tradesmen have made do with simpler chisels for millennia, but we can at least agree that the Aristocrats resolve the problem with socket chisels:  although it is arguably not a great inconvenience to fix a loose handle it will never be necessary with the Aristocrat.

I think it would be a bit harsh to judge the Aristocrat chisel a failure based on its apparent limited number of sales – the 1960s were a difficult time to be selling premium tools and the market was rapidly changing to suit the needs of infrequent DIYers rather than people using tools to make a living.

Perhaps the time is ripe for a reintroduction – indeed Lee Valley seem to have taken it as inspiration for their drawbores as did Rob Cosman for his IBC range of chisels.

A design classic?  Yes, why not.