Before you remove the valves you have to take off the tappet covers. A common problem is that these covers seize tight in the cylinder head and – since they are made of a soft aluminium alloy – they can easily be damaged during removal. It is easier to remove them when the engine is installed in the bike, since you might need to apply a bit of force to get them off.

My covers were no exception and were already rounded off, and I had to use a metal file to get two vaguely flat edges on the caps before I could get a good purchase with a pair of monkey grips. Once I had a tight hold it was just a matter of tapping the grips with a hammer to free the covers. Needless to say new caps were needed after his final mangling, but they are still readily available.

If you still have the original toolkit supplied with the bike then the 6 sided 23mm ring spanner included is a good fit when you refit the covers (don’t over tighten them!)

The valves are held closed by springs that are awkward to compress, but are easy to remove with the correct sized valve spring compressor. There are ways of doing it without this special tool, but a 10 piece compressor set can be bought new for under £15. All the valve spring compressor does is to press down on the spring to release the pressure on the two collets that hold the spring cover in place. Once the collets are removed the springs and valves can be extracted:

Over time carbon deposits build up on the valves, inside the combustion chamber and on top of the piston – a bit of elbow grease will remove it, although I had to do mine twice after it was pointed out that my first attempt was not good enough! The edge of a small bit of copper pipe can be used as a scraper, and a bit of metal polish will give the valves and chamber a nice shine.

It is important that the valves form a tight seal with the valve seats, otherwise hot gases can be forced through the gaps reducing power and possibly damaging the valve face. To get a perfect seal you can lap the valves. This involves applying lapping compound (a fine abrasive) on the edge of the valves and then – having put them in place without the springs – twisting them them back and forward to lap the valve and valve seat surfaces. My first attempt at this involved attaching a bit of fuel hose to the end of the valves and using a drill to spin them back and forth, although I have subsequently found out that this is frowned upon by proper mechanics as it can cause too much wear. In my case, nn closer inspection I realised this the drill not had much of an effect, I think because I could not get sufficient pressure between the valve and the seat without the valve starting to spin inside the rubber tube, so no harm done. For my 2nd attempt I just used a 2p coin to work the valve back and forth (there is a shallow indentation in the valve faces that appears to be for this purpose, presumably because the traditional approach of using a stick with a sucker on the end to grip the valve is difficult with such small valves):

To test the seal you can either pour some fuel into the upturned head and look for fuel seeping underneath or, if you have a compressor, you can blow air through the inlet and exhaust ports and look for air bubbles:

Alternatively, find somewhere dark and shine a torch from underneath through the inlet and exhaust ports – the light will leak through even the tiniest of gaps between the valve and the valve seat. 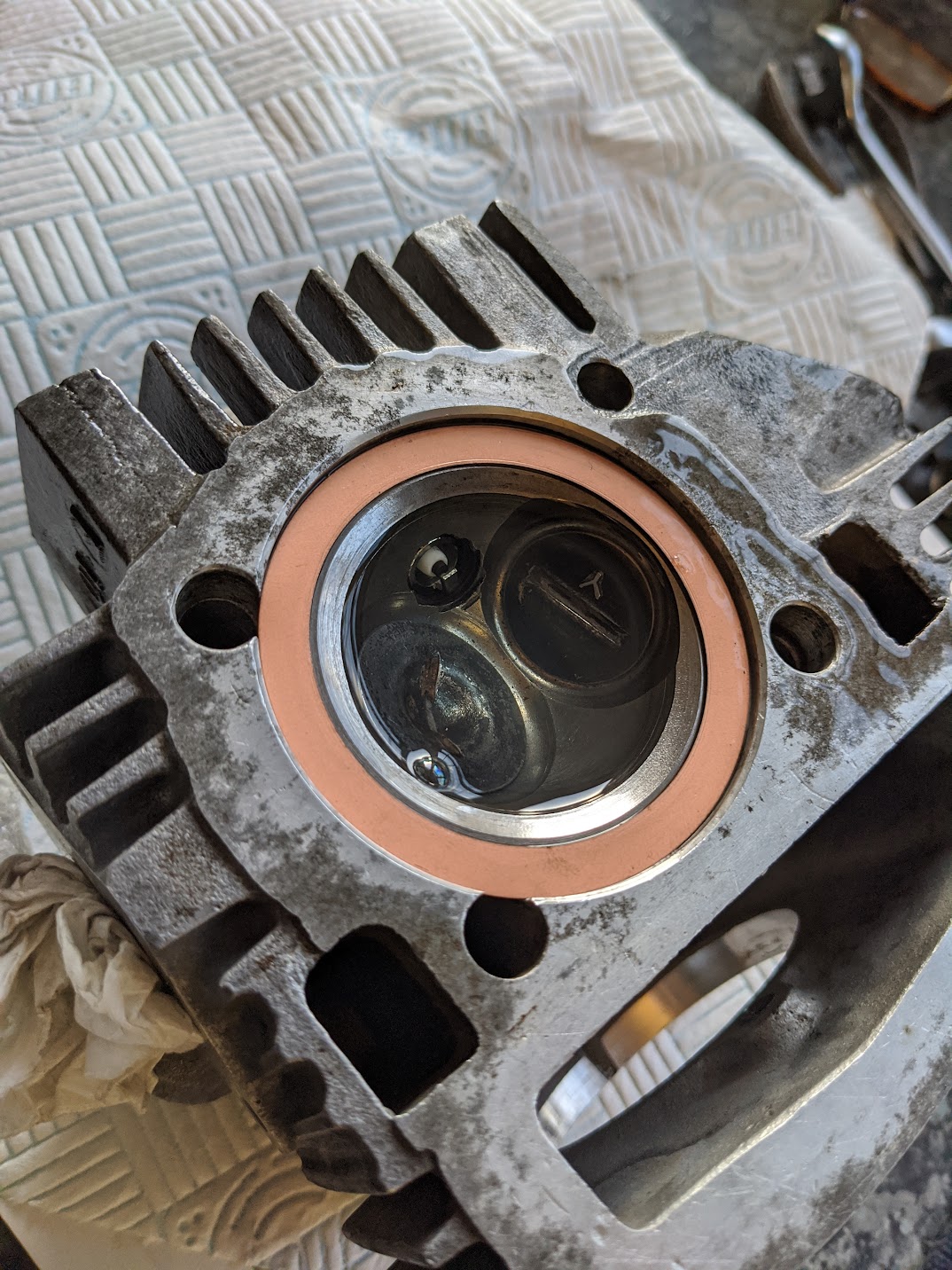 The valves will need replacing if the service limits are exceeded: