We already saw that the basic function of the carburettor is to mix fuel and air in the right proportions before it is ignited in the cylinder. It is helpful to know a bit of terminology before we get into the details:

The boffins tell us that there is an an ideal mixture – known as a stoichiometric mixture – where there is just enough oxygen present in the mixture to burn up all of the fuel.

One consequence of lean running is additional heat (as we know from watching open fires, flames burn faster and hotter when supplied with more air); and a consequence of rich running is that some fuel in the cylinder is unburned, reducing power and wasting fuel.

Given all this, one way to think of what the carburettor is doing is controlling the mix of air and fuel so that it burns as completely as possible without creating conditions where the piston, cylinder or cylinder head get too hot.

“Jets” control the flow of a fluid (air or fuel) through an orifice that has been exactly drilled to a specified size. c90s have a main jet and a pilot jet. These jets supply a mixture of air and fuel on two different circuits, which is another way of saying they are able to supply their air and fuel mixes independently of one another.

Here are the parts involved in controlling the supply of fuel and air after the engine comes off idle: As I mentioned earlier, some of the parts fitted in my carb have been changed by the previous owner: The jet needle is from a keyster set (it is stamped 16631) and I assume the needle jet is from the same kit. The main jet is unmarked.

I’ve replaced all these parts with original Hondas parts – the new jet needle is stamped D32 and the main jet is stamped with its size (78) and the Keihin logo. The needle jet is not stamped (it is a bought as paired part with the jet needle).

The little circlip is used to suspend the jet needle in the slider (there are five possible positions for the clip. The default setting the middle (3rd) position – more on this in a later post). 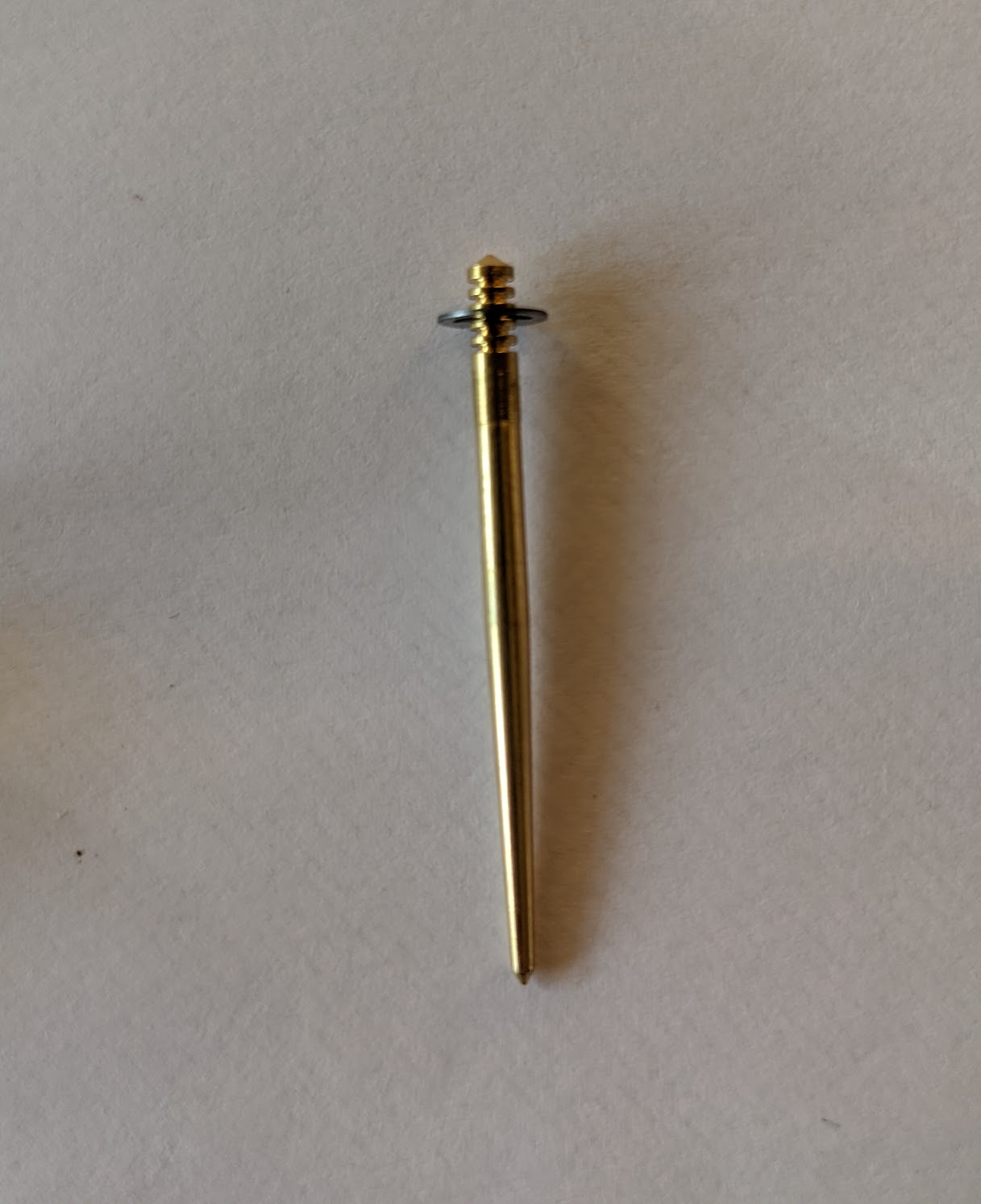 There is not a lot to say about fitting the parts: the first bit to go in is the needle jet, this is a push fit and can be popped in and out with a suitable sized wooden drift (e.g the sharpened end of a pencil). Mine was a tight fit and needed a bit of persuasion to come out and a bit of heat was needed to put the replacement back in. Note that the orifices at each end of the needle jet are different sizes – the wider one points towards the top of the carburettor. On the new Keihin jet the circumference of the top part on the needle jet is slightly larger than the hole in the carburettor body, which prevents it going in the wrong way round, but apparently on other versions it is possible to get them in upside down

The main jet screws into the base of the main jet holder and the holder is then fitted into the carb body so that the main jet is sat in the chamber of fuel below and the top of the needle jet pokes into the venturi.

One other thing to be careful with is to make sure the “W” clip that holds the jet needle in place does not obstruct the slot running the length of the slide. This slot engages with a lug in the throat of the carburettor (to prevent the slide rotating) and, if the W clip catches on it the throttle sticks open. It took me an embarrassingly long time to work out that this was the problem when I got this wrong initially.

Here are the Honda instructions on assembly and disassembly of the slide and jet needle:

I’ll endeavour to explain how these bits work in the next thrilling instalment!